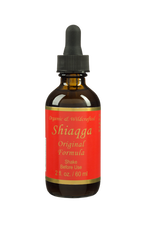 The wild Shiaqga is considered one of the most powerful weapons in fighting against illness and disease.
​Product Description

The wild Shiaqga is considered one of the most powerful weapons in fighting against illness and disease. It modulates the immune system by as much as 4000% within 20 hours after taking Shiaqga. It contains 3-beta-D-glucans that are known to be anti-aging.

Shiaqga is an ancient Native American Medicine that over the last century was forgotten by all but the most dedicated Medicine Men and Women. Now, thanks to a dedicated few, it has recently become available to everyone. The Wild Shiaqga is considered by many Native American Practitioners to be their most powerful weapon in the fight against illness and disease.

The 3-beta-D-glucans, which make up a large part of the cellular structure of this herb, causes a pan-systemic modulation of T-Cells, Macrophages and Neutrophil White Blood Cells when ingested. The number of T-Cells has been shown to increase in number and viability by as much as 4000% within 20 hoursafter taking Shiaqga!

Macrophages and Neutrophils are the two cells upon which all other Immune Cells depend. You can have many viable B-Cells and T-Cells, but they will not be effective without the programming provided by the “Communicator” cells that assist in activating the healing stem cells found in your body. Shiaqga also contains bitter triterpene compounds that support the thymus and spleen (essential to insuring that immune cells are properly programmed), anti-tumor polysaccharides, and blood pressure-reducing angiotensin re-uptake inhibitors.

How Germanium Benefits Your Health

Shiaqga is one of the richest sources of natural germanium. Germanium is a powerful, antioxidant, pain modulator and healer. The Beta-glucan molecules in Shiaqga promote a modulation of the immune system and response cascade. In other words, Shiaqga causes the body to produce a vast number of the specific immune cells needed to make proper use of the antioxidants found in the food you eat, and at the same time it provides a powerful source of antioxidant germanium that you would not normally be able to acquire in any other way.

As a semiconductor element, germanium has a small band gap that allows it to efficiently respond to infrared light. The two important characteristics of germanium that brings about healthy function effects are its natural ability to balance the body’s ions (bio-electricity) and the penetration of Far Infrared Rays into the human body.

The germanium atom has thirty-two electrons with four of them constantly moving unsteadily along its outermost shell. These four electrons are negative-charge carriers. When approached by a foreign substance, one of these four electrons will be ejected out of its orbit once the temperature is above 32 degrees Celsius. This famous semiconductor phenomenon is known in electronics as ‘the positive hole effect’. The remaining three electrons will seize an electron from other atoms in order to maintain balance.

Our current urban lifestyle exposes the human body to harmful positive ions generated from mobile phones, computers, electronic and electrical equipment, chemicals, acid rain and ultraviolet rays. Hence, the negative-charge ion from germanium will help in blood purification and balancing the positive and negative ions within the body. This also achieves muscle relieving effects as well as reducing fatigue and tiredness.

It should be noted that the above benefits may not be experienced by everyone and are merely a result of supplying minerals that affect bodily functions and may be missing in a person’s diet.
​
Beta-glucans (Beta 1, 3-D Glucan) found in Shiaqga aid as an antidepressant, anti-diabetic, anti-leukemic, antimicrobial (fungus, bacteria, and virus), anti-tumor, anti-inflammatory, regulates blood pressure, reduces cholesterol, promotes healing, and so forth.

The Beta-glucans in Shiaqga have been scientifically found to regulate production and function of basophil and eosinophil white blood cells, reducing inflammation, pain and fever. Shiaqga contains 94,000,000 biologically active Beta-glucan molecules in every serving. Other top selling beta glucan supplements do not even come close to this amount.

Why has the information about the quantity and the quality of the Beta-glucans and other phytoceuticals in Shiaqga not been made available to the world sooner? The simple answer is that production of bio available Beta-glucan products has been bogged down in the costly process of obtaining the proper molecules from the cell walls of yeast. Only recently was it discovered that one of the Sacred Plants of the Native Americans contained vastly greater amounts of this important compound than any other source. It has taken this discovery, the far-reaching impact, and the right team of people to make Shiaqga commercially available.

It stands to reason that if the immune system is strengthened, numerous ailments and illnesses can be aided and alleviated. There is impressive scientific research demonstrating that the Black Cumin found in Shiaqga has some very beneficial, anti-bacterial and anti-viral properties. Long used as a traditional remedy for colds and viral infections, Black Cumin is still a good choice to use for those illnesses. In contrast to synthetic cold and flu medications, using Shiaqga with Black Cumin may help strengthen the immune system so the body is able to heal quickly and resist additional infections. People who are under extreme stress tend to be much more susceptible to illness. The Black Cumin contains unsaturated fatty acids, linoleic acid and gamma Linolenic – all essential for a healthy immune system.

One of the most important components in Black Cumin is the volatile oil Nigellone which is known to be effective for bronchial asthma and respiratory allergies. It has the ability to expand and relax the airways, reduces the release of histamines into the bloodstream and works against allergic reactions. Long-term supplementation with Black Cumin has been shown to reduce allergic symptoms up to 90%. The saponin and nigellin in Black Cumin give it its appetite-enhancing and digestion-stimulating qualities. It acts as an antihistamine and pain reliever.

Research on Black Cumin has focused on its positive effects on the immune system. Scientists know that Black Cumin stimulates bone marrow and immune cells, raises the interferon production, protects the body against viruses, destroys tumor cells and inhibits infection. Research revealed that Black Cumin possesses antibiotic properties that act against a wide spectrum of gram-positive and gram-negative bacteria. In side-by-side tests Black Cumin matched or exceeded the effectiveness of ampicillin in defeating gram-positive bacteria.

Laboratory tests also indicate that Black Cumin may hold promise in fighting cancer cells. The study shows that Black Cumin is superior to other medicines in many regards. It proved to be more effective than chemotherapy and radiation treatments – without serious side effects. The Cancer Immuno-Biology Laboratory of South Carolina ran a series of experiments in which mice were infected with tumor cells. Two thirds of the animals treated with Black Cumin oil were still alive thirty days after being infected. In contrast, all the mice that did not receive Black Cumin treatment died within the same time period.

Concentration problems are not limited to the elderly. The main causes are lack of oxygen and nutrients to the brain, stress, pressure and internal conflicts that lower the ability to concentrate. Using Black Cumin regularly may ensure you will keep a clear head even in old age.

The Peppermint found in Shiaqga may benefit the respiratory system, assist with flu, colds, asthma, bronchitis, fevers, throat infections, sinusitis, spasmodic coughs, colic, cramps, and toothaches. It is stimulates, strengthens and is beneficial for mental alertness, shock, fatigue, nervous stress, fainting, headaches, vertigo, and migraines. It assists indigestion, colic, motion sickness, nausea, gas, diarrhea, halitosis, breath freshener and heartburn. It has been reported that Peppermint directly effects the brain’s center, which triggers a sensation of fullness after a meal.

It is an astringent, antiseptic, and stimulates the immune system in the formation of red and white blood cells, is beneficial for Parkinson’s disease, and cancer. Lemon assists with debility, anxiety, apathy, nervous conditions, emotional clarity, awareness, brings joy, relieves touchiness, grudges, and resentment.

The Cinnamon Bark found in Shiaqga assists circulation, lowering glucose, strengthens the heart, endocrine, and nervous systems. It assists in controlling diabetes by normalizing triglycerides and lowering blood sugars. It is a general health tonic and enhances the action and activity of other essential oils. It is an immune stimulant and has been found that viruses, bacteria, and fungus cannot live in this oil.

Powerful antioxidant capacity and anti-microbial benefits. It assists with increasing energy, is a digestive stimulant, beneficial for the digestive system in such conditions as motion sickness, diarrhea, ulcers, intestinal parasites, urinary infections, and helps the metabolic process. It is also beneficial for stimulating memory, tightens muscles, and combats acid conditions. Cinnamon Bark is a powerful purifier, enhances the action, and activity of other oils it is blended with.

Contact me at  941-840-1268 or email me at debbie@myjourneytoacure.com if you have any questions.