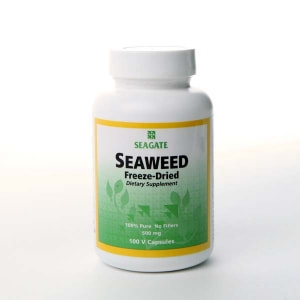 Benefits:
Seaweed is one of the primary sources of nutrition for ocean life. Seaweed is an excellent source of iodine, fiber, minerals, protein, and chlorophyll (10mg/100 grams), is rich in antioxidants and represents up to 10% of the diet in several Asian countries. Seaweed is an excellent cleanser, digestive aid, detox. nutrient and source of calcium and iron. This product has a very pleasant marine flavor and smell.

Raw Material Source:
Seagate's seaweed is harvested by divers from an isolated bay along the central Pacific coast of Baja California. This seaweed has no level of detectable contamination. It is a highly sustainable marine resource, growing up to 3 feet per day during the summer months.

Processing:
Seagate divers deliver the fresh seaweed directly to the factory on the day that it is harvested. Seagate washes the seaweed in freshwater, removing most of the residual seawater salt. The remaining sea salt provides a rich marine taste and mineral content. Seagate freeze-dries the seaweed in modern stainless steel tanks, capturing all of its valuable nutrients.

Iodine is an important trace mineral found in seaweed. One serving of seaweed powder (10 grams) contains 0.12 mgs of iodine or 59% of the suggested daily value. For most people, iodine is an essential mineral helping to regulate the thyroid. However, persons with a thyroid condition should first consult with their health care professional to determine their limit of iodine consumption.

Seagate Seaweed can be enjoyed as either a powder or in capsule:
300 gram Powder bottle with a convenient shaker cap.
​This flavorful and nutritious ocean algae can enhance many foods. Lightly sprinkle it over salads, soups, pastas, omelets, chowders, cooked vegetables, or into juices and smoothies. Seaweed powder can also be mixed with a small amount of water to make a paste and applied to the face for its complex of sea salts, minerals, and protein to help soften the skin.

100 Capsule Bottle:
A convenient and inexpensive way to take this rich marine source of fiber, minerals and protein every day, containing much less iodine than a serving of seaweed powder.

Radiation Monitoring:
Since the 2011 Japan Fukushima Dai-ichi nuclear disaster, Seagate has been carefully monitoring the production of Seaweed Powder for any levels of radiation. Attached please find copies of the independent radiation tests for Lot #011 for 2012, Lot #012 for 2013, and Lot #014 for 2014 production. Of primary concern is the possible presence of radioactive isotope Iodine-131. Federal FDA standards for food products allows a max level of 170 Bq/kg. The independent laboratory found no detectable levels of any isotope contamination in Seagate's Seaweed for 2012 and 2013 for all isotopes tested. For 2014, 21 of the 22 isotopes tested had no detectable levels. One isotope had a level of 0.019 pCi/G, which is just .005 above the lab’s minimum level of detectability by its equipment, and compares to an allowance by the FDA of 1200 Bq/kg. This level is therefore insignificant.   These reports are forwarded to the California Food and Drug Administration.

On March 11, 2011 Japan's Fukushima nuclear reactor meltdown occurred. It has been over 6 years since the disaster. The amount of time for the ocean’s currents to move a water particle from Japan across to Alaska and then south to Baja California where Seagate harvests seaweed is approximately one year. The first signs of radioactive water to appear in Seagate’s area of operation would have been in May 2012.  By 2014, if the radiation were going to become a factor, it would have had sufficient time to show up as contamination of the local seaweed crop. Fortunately there was no contamination in 2014. A combination of the coriolis effect and local upwelling of rich clean bottom waters along the California Coast apparently have been protecting this region from the radiation-contaminated waters. By 2015, our radiation tests began to detect very minute levels in the seaweed.  However, the present 2017 tests show that all the radiation has entirely disappeared.  At this point becoming we can conclude that Baja California will not be affected.
​ ​
Click Here to Purchase

Health Disclaimer
These products are not intended to diagnose, treat, cure, or prevent any disease.
The statements on this website have not been evaluated by the Food and Drug Administration.
This information is for educational purposes only and is not intended as a substitute for sound medical advice. It is presented with the complete understanding that all authors and contributors of this web site have neither liability nor responsibility to any person or entity for any injury, loss or damage caused or alleged to be caused by any information within the web site. By viewing this web site you agree to take full responsibility and liability for the dissemination of the information and understand that you need to seek out advice from a trained health care professional in all matters pertaining to your physical health. Medical supervision is advised for pregnant or lactating mothers and young children. If any side effects are noted, discontinue use and consult a trained, licensed healthcare professional.
My Journey to A Cure Copyright 2010 - 2021